On Wednesday, State Senator Julie Rosen (R-Vernon Center) was honored with an award for conservative achievement from the American Conservative Union Foundation (ACUF). Sen. Rosen won the award for her voting record and her commitment to conservative principles like limited government, low taxes, and spending restraint.

“I have been a conservative for as long as I can remember,” said Sen. Rosen. “It’s not just empty rhetoric; it’s something I hold deep within my heart. I am humbled and honored to be recognized for my dedication to a cause I cherish so deeply.”

ACUF announced the awards in conjunction with the release of its review of the 2019 Minnesota legislative session. ACUF’s Ratings of the States are designed to reflect how elected officials view the role of government while illustrating the differences between chambers of the legislature and revealing lawmakers’ positions on a wide variety of issues that directly affect Minnesotans. ACUF arrived at their rankings by evaluating votes on subjects such as the sick tax, expanding Obamacare, income tax increases, payroll tax increases, global warming, and more.

Click Here to view the 2019 Ratings of Minnesota online. 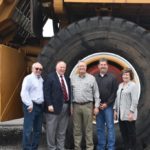