Sen. Abeler: Human Services budget helps those who need it the most

Though on track to spend $37 billion every two years in the human services arena, many of the over 100,000 Minnesotans with disabilities and special needs are poorly served. In keeping with the goodwill and generosity of Minnesotans, the Senate budget redirects hundreds of millions of dollars of funding to help those people who are most vulnerable and have special needs.

The Senate bill increases the disability waiver rate payments that were cut last July.  It eliminates “spend down” requirements, where seniors and disabled adults who already have very little are required to expend several hundreds of dollars each month before their Medicaid health care kicks in. It removes the very burdensome annual fee known as TEFRA on parents who have children with disabilities. Also, it will make it easier for people with quadriplegia and other severe needs to hire PCA’s. Compared to the Governor’s and the House bill, the Senate does not cut nursing home reimbursements. It instead increases nursing home funding for repairs and rewards assisted living facilities who serve a high percentage of seniors on the elderly waiver.

In response to the horrific reports of systemic fraud, the proposal freezes spending on the controversial Child Care Assistance Program (CCAP) starting in FY 2022 until the state can prove to Minnesotans that fraud has been sufficiently rooted out of the system and the oversight system has been reorganized and is truly effective.

“About one-third of the budget document is focused on program integrity. This should be a clear signal to the state that we’re extremely unhappy with the way they let fraud and wasteful spending hurt the most vulnerable among us. The public has lost confidence in the Department,” Senator Jim Abeler (R-Anoka), Chair of the Human Services Committee said. “We want to help people, but we don’t want Minnesotans to be taken advantage of, either. We spend over $18 billion each year between state and federal funds to help over a million people with needs. There is more than enough money available if we spend it wisely. The state needs to take immediate and meaningful steps to clean up the fraud and focus on serving the children, elderly, disabled, and their families who need it the most.” 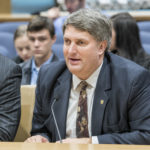