Senator Carrie Ruud (R-Breezy Point) received Minnesota Public Television’s ‘Good Neighbor Award’ last week for her staunch support of public programming during the Minnesota Public Television Association’s (MPTA) biennial day at the capitol. This session, Senator Ruud has continued her support of public television introducing legislation to use Legacy funds for MPTA’s current production and to allow them to document new Minnesota journeys in the future.

“I want to thank Minnesota Public Television for being part of my neighborhood,” said Senator Ruud “Minnesota Public Television is such a part of what makes our Greater Minnesota districts amazing.  Every night you give us an opportunity to hear the local news and a chance to learn about what’s happening in our communities. The unique projects created by public television like Vietnam: Minnesota Remembers allow Minnesotans an opportunity to heal and grow and hold special places in our hearts.”

With Legacy funds, each station of the MPTA produces arts and cultural series, specials, and cultural-historical documentaries. Legacy-funded media is broadcast across all stations, making each station’s reach statewide with the content also being made available online. Additionally, many of the programs offered by MPTA have corresponding activity guides designed by and for educators. 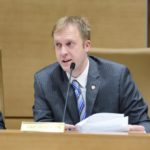