In recognition of her advocacy and her legislative work on cancer prevention and patient quality of life, Sen. Carla Nelson (R-Rochester) was recently named a recipient of the American Cancer Society Cancer Action Network’s Distinguished Advocacy Award. The award was presented to Sen. Nelson at a ceremony during the Olmsted County Relay for Life on June 16.

“It is a tremendous honor to have received this award,” said Sen. Nelson. “My mother is a 36-year cancer survivor, and the best way to honor my mom’s courageous battle – and that of the thousands of other Minnesotans affected by cancer – is to do what I can to advocate for cancer prevention, research, and treatment.” 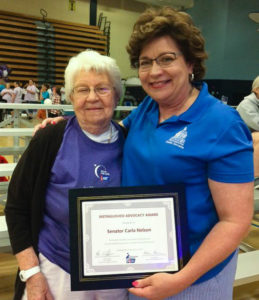 Sen. Carla Nelson, right, with her mom, Deloris Huse, left, after receiving the Distinguished Advocacy Award during the Olmsted County Relay for Life on June 16, 2017.

“Sen. Nelson championed two important legislative priorities for the American Cancer Society,” said Ellie Beaver, director of government relations for the Minnesota American Cancer Society’s legislative arm. “This year’s work was the first step toward the goal of leading in tobacco control and prevention. We also applaud the passage of Sen. Nelson’s biosimilars bill and know Minnesotans will benefit from its implementation, as it will bring better access to the medications they need.”

“Cancer is a terrible but disease, but many cancers are preventable,” Sen. Nelson continued. “This year, 5,900 Minnesotans will die from smoking-related diseases. My mom, and countless Minnesotans, are living proof that cancer can be beaten. By working together, we can keep Minnesota a leader in health, wellness, and cancer prevention.”