“It was great to see so many people who 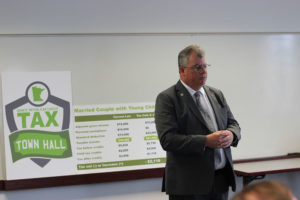 were so interested in Minnesota’s tax policy that they took time out of their Saturday afternoon to come and have a discussion with a few legislators at a public library,” said Sen. Goggin. “Unless we make changes to fix Minnesota’s burdensome tax code, Minnesotans are going to be hit with significant tax increases. We have to make sure that doesn’t happen, and I’m glad there was a consensus that we need to act.”

The discussion included how the federal Tax Cuts and Jobs Act will impact a typical Minnesota family, how Minnesota’s high taxes could negate the benefits of the federal bill, and how we can take advantage of the overhaul to simplify our complex laws.

“Last session we got the ball rolling with a $650 million tax relief bill – the largest in almost two decades,” added Sen. Goggin. “It included important, long-overdue changes like phasing out the tax on Social Security income, and tax breaks for farmers, students, and young families. In 2018 we have even more opportunities, and it’s terrific to see the public already taking an interest.”