Get your billion back, Minnesota! 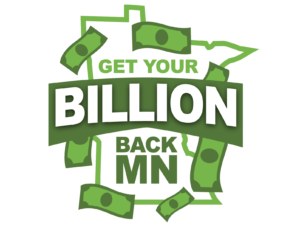 Senate Republicans unveil plan to give budget surplus back to taxpayers

Senate Republicans today announced a multifaceted plan to return Minnesota’s budget surplus to taxpayers. The Senate Republican tax plan emphasizes putting money back in the pockets of families and individuals, particularly middle-income and low-income earners, so they have more security, freedom, and flexibility to chase their dreams. This is the marquee piece of Senate Republicans’ Vision 2020 Agenda, which was unveiled in January.

The Get Your Billion Back plan is built upon a massive package of tax cuts worth more than $1 billion, which will ease the burden for every single Minnesota taxpayer. The plan calls for reducing the bottom income tax rate, completely eliminating taxes on Social Security income, expanding the K-12 income tax credit, and more.

“It is time to get your billion back, Minnesota,” said Sen. Roger Chamberlain, chairman of the Senate Tax Committee. “I have met so many people who have told me what a little extra money in their pocket would mean. For some, it will be easier to afford childcare, groceries, or medical bills. For others, it means being able to go to a Wild game, a concert, or a long-overdue date night. It’s about security and flexibility for Minnesotans and their families; it’s about giving people the freedom to create their own opportunities and follow their dreams.”